Friday my father-in-law started having very sharp stomach type pains and his blood pressure dropped to where he couldn't see it register on his sphigmomanometer. Mother-in-law took him to the emergency room, assuming the logical, which that one of his ulcers had started to bleed again, but apparently that's not it. He was admitted and is still there and they still don't know what's going on, other than that he has some kind of infection, for which he is getting IV antibiotics. He's feeling better enough to get crabby about having to stay there, so that's a good sign. He told Mom he was ready to hitchhike home if she wouldn't drive him.
Posted by Maria Stahl at 5:31 PM 1 comment:

Blogspot didn't like me yesterday and wouldn't let me post, but yesterday was Loretta's funeral. It was lovely, and about 50 people came. Barry was a pallbearer. I sang two songs, "Lonesome Valley" and "Just a Closer Walk With Thee." The Methodist minister from Waukon gave the sermon and did a nice job with his homecoming-themed message.

We accompanied her casket to the gravesite and then afterward had lunch at the home of a hospital volunteer who had spent quite a bit of time with Loretta in the past couple of weeks.
Posted by Maria Stahl at 8:16 AM 1 comment:

Loretta was partially paralyzed from birth and lacked full use of her right side. She had a little bit of pinch function of her right hand and could use her right leg for balance, mostly, but that was about it. She loved music, loved watching people dance and told me that she always wished she could dance herself.

She lived a difficult life, always poor, always struggling, working very hard. She was never allowed to go to school. Her father said she was too stupid to do anything but keep the chickens. (He was so wrong.) She never learned to read or write. Her mother arranged a marriage for her with a man she did not like, and though he was very difficult to live with, to say the least, she was his faithful wife for all the rest of his days.

Loretta loved the Lord very dearly and knew Him as a personal friend. When we were packing to move her to her senior citizen apartment last October, she reminded me frequently to save out the big framed painting of her Lord till last, because she needed it with her and if it went into a box, she would not be able to sleep. She thanked Him constantly, even though she was afraid to leave the familiarity of her little house. She couldn't sleep much anyway in those last days before the move; she told me that she would sit in her bed and hold the painting close to her and thank her Lord that He had answered her prayers to fix her roof, and that though it was not in the way she had expected, she knew that He knew what was best.

Once in her clean little apartment with the good furnace and the sound roof, I remember her looking around at all the mess and boxes and sighing happily to herself, and muttering, "I don't know why I didn't do this years ago." And she thanked her Lord. In fact she thanked Him every day for her home for as long as words could still come.

A couple of weeks ago, Loretta quit eating. Her home health caregiver Sonya had been worried about her lately anyway and that was what made her take Loretta to the doctor. The doctor admitted her to the hospital. Loretta had many systems in failure, and she had pneumonia. We weren't sure she would make it out of the hospital, but once the pneumonia stabilized, she was moved to a nursing home. We last saw Loretta Sunday afternoon. She could no longer speak, but she knew we were there, she enjoyed my reading her mail and the Scripture to her, and when Barry said goodbye, she held him very tightly and would not let him go for some time.

Loretta went to Heaven last night at about 11:00 p.m. We miss her, but we know that her arms and legs are strong now, that nothing hurts, that her voice is powerful and beautiful, that she stands straight and moves with ease. At last, Loretta can dance! I think she is dancing and singing and praising her Lord Jesus, her dearest friend and her saviour. He kept His promise to her. He did indeed walk through the valley of the shadow of death with her, and when she stepped out into the light at the other side, He was holding her hand.
Posted by Maria Stahl at 8:04 AM 1 comment:

From an estate sale two blocks away: 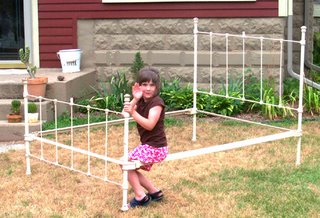 Now you can see how dry we have been lately!

And this was free to whoever could muscle it to their car: 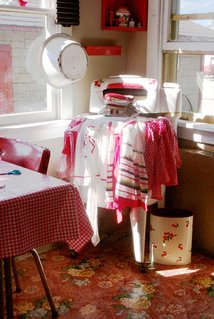 Posted by Maria Stahl at 6:04 PM No comments:

What to Do If Your Parents Won't Take You Camping

Go anyway. Invite a friend or two and camp out in your own back yard.