Is our government doing enough?


In The Know: Is The Government Spying On Paranoid Schizophrenics Enough?
Posted by Maria Stahl at 7:24 PM No comments: 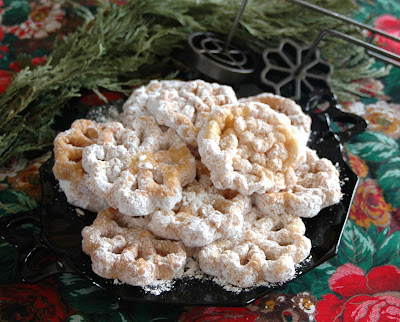 We canceled church for the second time this season due to blizzard-like conditions. After family services in the living room, K. and I made rosettes.
Posted by Maria Stahl at 1:40 PM No comments:

How Much Is Your Corpse Worth?

$4140.00The Cadaver Calculator - Find out how much your body is worth.


And while we're at it: How likely would YOU be to survive the coming Zombie Invasion? I lost points big time for not keeping a gun in the house. (I notice they did not include "cricket bat" in the list of potential weaponry one may have in one's home. Not that I have a cricket bat, mind you; but I've seen Shawn of the Dead a few million times.)

Here is an interesting chart showing when various foods came onto the human race's menu.
Posted by Maria Stahl at 7:44 AM No comments: 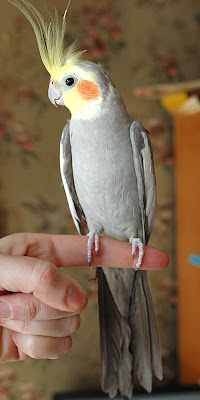 Look at this brave boy!

I have wheeled Jack-Jack's cage into my office during the day when the children are at school, so he will have some company, leaving his cage door open. He was not interested in leaving his cage at all until suddenly today when he decided that it was time, marched deliberately out onto the the platform, looked around a moment and then took off flying! He fell behind the file cabinet and couldn't get out, hissing at me and breathing heavy. I gave him a stick to step onto and hauled him out of there, praised him for his bravery and for "stepping up" so nicely, and then tried offering him a finger to step-up to. He has been taught this before, I believe, though he did nip me before stepping. We stepped a couple of times, then he flew again - and ended up behind the SAME file cabinet, got hauled out again by his stick, and we did more stepping practice. I had him take a break on my shoulder, where he yanked on my hair a bit, and then we took this photo. What a good boy he is.

Of course a few minutes after I took the photo he got tired of practicing and bit my finger hard enough to make it bleed pretty good, but that's not a big surprise.

He is back in his cage resting. All that excitement tired him out.
Posted by Maria Stahl at 1:02 PM 1 comment:

Lil Miss A came home with some shocking news she had learned from her buddy R. R said that Chinese people put a kind of poison on toys that makes you not believe in God anymore, and that he had a whistle from China that had this poison on it. Lil Miss A begged him not to blow the whistle, but after some discussion, he decided to anyway. He thinks his faith is strong enough to withstand evil Chinese plots, evidently. 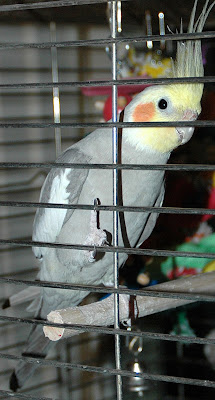 This is Jack-Jack, a sweet young male cockatiel we adopted today from the Coulee Region Humane Society. He is scared of hands, but he likes faces a LOT, and he likes to whistle and chirp at and interact with humans, dogs, and guinea pigs. Just not cats. Cats are icky.

Jack-Jack belongs to Lil Miss A. It was she who selected his name.
Posted by Maria Stahl at 7:54 PM 2 comments: