A bunion by any other name...

That's right, I have a, uh, um, a bunion. Can't they think of a better name for it? For example, for "washerwoman's elbow," there is "tennis elbow," which brings to mind long days spent practicing for Wimbledon rather than long hours spent scrubbing a floor or peeling root vegetables.

So instead of "bunion," how about "distance runner's toe"? Or maybe "Prada foot," so named because you can make it worse by wearing expensive narrow shoes?

Anyway, I have one on my right foot, and am getting one on my left. I'm going to have the right foot operated on Friday. The left will wait a few years. I am going to be on crutches for at least awhile. They say I can't drive, though I intend to figure out how to do it safely at least around New Albin. And of course it is going to be a little bit interesting preparing for out-of-town guests for Thanksgiving while hobbling around in a CAMboot. Oh well. By Christmas I should be back in heels again, no longer banging my Prada foot into every hard or sharp object I see, no longer having it get stepped on by the dog (who rarely, if ever, misses). I think it will be worth it.
Posted by Maria Stahl at 4:35 PM 1 comment:

I don't really know why I keep dragging my LPs from house to house, but I have never been able to bring myself to throw them out. Master K. was looking through them the other day and asked if I would please buy a record player to play them on because they're "cool." Amazed that my stuff is old enough to be considered interesting, I bought a turntable for a buck at The Way Station.

Since then we've been amusing ourselves playing scratchy disks of Kiss Double Platinum, Journey's ESC4P3, Foreigner's Head Games, The Best of the J. Geils Band, and others. This is fun. :)
Posted by Maria Stahl at 1:08 PM 1 comment:

No, this is my parents' church, Beth Immanuel (House of Messiah, more or less), a church they helped to found in the Twin Cities. It is, for want of a better term, a Messianic church, a Christian church in the Hebrew tradition. Anyway, it was founded... I'm gonna say 5 years or so ago, and was somewhat of a church plant from another Messianic congregation, Sar Shalom (Prince of Peace). My parents have been involved in the guiding of this church since day one.

I was startled to learn that the group had put in an offer on a church building, a wonderful old brick Presbyterian church in Hudson, Wisconsin, of all places. This afternoon their offer was accepted, and soon this

will be the home base of their church.

It looks like a super place. Theirs is a very active church, and every inch of the building will be put to use.

I'm thankful for this blessing on them!
Posted by Maria Stahl at 9:37 PM 1 comment:

Today is Barry's ... um... 43rd birthday. (I had to think there for a minute.) We succeeded in a) surprising and b) greatly pleasing him with his present (we frequently manage one or the other but not both). It was a DVD of 11 early Speed Racer cartoons that he remembered from his boyhood. He's going to wear his Speed Racer tee-shirt and watch Speed Racer cartoons one of these days when life slows down long enough for some down-time.
Posted by Maria Stahl at 10:16 AM 1 comment:

Q: How do cows solve math problems?
A: With a cowculator.

Q: How do cows manage their busy schedules?
A: With a cowendar. (Or, as Miss B. contributed, "by moo-titasking.")
Posted by Maria Stahl at 10:13 AM No comments:

I finally figured out what to do with my apron collection. I stapled them to three walls of my front porch, up above the windows, where none of them will get direct sunlight. I took a sort of lame panoramic picture here to show you. Click on the pic below to see it in full.

We Don't Need Another Dog


I keep repeating it in an attempt to convince myself that we are not the right family to adopt Sandy.

But when I look at that page, and I see that sad little face and drooping head, I see the ruined coat that reminds me so much of Prissy's coat when we rescued her, or even of Bo's when we got him, and I know what beautiful dogs they turned into with a lot of love and some decent food, and I want to drive to Canton right this instant. It's not far. Less than an hour. I could be back with her by lunchtime.

We don't need another dog.
Posted by Maria Stahl at 9:12 AM 2 comments:

Read the full story here. In brief, a no-kill shelter in the state of Washington was broken into over the weekend. The vandals opened the doors to all the cages, releasing about 50 rescued cats and kittens and many, many small animals like mice and gerbils. It looked like some of the little animals had been deliberately stepped on, while the cats had caught many more of them. The cats also hurt one another in the melee.

The vandals may have broken in with the thought of robbing the place, but apparently this looked like more fun, as they left all the money in the till when they left.

This is a volunteer run operation taking care of many abandoned animals, mostly cats but others too. They need help now more than usually. We are suckers for abandoned animals, as you well know if you read this blog, and we just sent some money by PayPal. Won't you please join us? Thank you!

Posted by Maria Stahl at 2:50 PM No comments:

Four years ago this month, we bought this house.

It is so different today from what it was like back then. I can hardly believe only four years have passed!

Let me see if I can dig up a "before" picture: 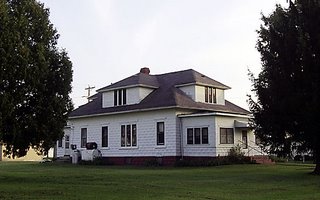 And here is an "after" (actually "during") picture that I just shot this morning (cloudy windy day but hopefully you get the idea). 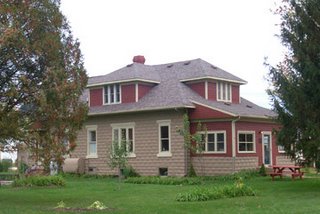 Small controversies can loom large in a town as teeny as New Albin (population 450 on a good day). The fuss that has been raging for some months now is whether we need another grocery or not.

For many years, there was a small grocery on Main Street that was open 7 days a week, and then across the square was the City Meat Market, which sells wonderful meats and specializes in its smokehouse meats. The smell of hickory or apple woodsmoke frequently wafts over the town, as the smokehouse is nearly always going full blast. Alan and Kelley are the current owners, Alan having bought the place from his parents. If I have the story straight, he is the third generation in the business. Anyway they have a grocery section as well, with as much as they can possibly cram into a small space using a lot of very high shelves. They have a refrigerator case and a freezer case as well as a couple of walk-ins in the back. Alan and Kelley are members of St. Peter's Church, and out of deference to the day of worship, they are closed on Sundays.

Main Street Market depended on local business for survival, so it slowly bled to death as its main customers were the elderly who don't drive out of town; the rest of us would drive to LaCrosse or Waukon to do our marketing, for prices and selection. The Main Street Market didn't do enough custom to keep the fresh foods fresh. The produce was scary. The frozen foods usually looked fossilized. The meat - well, nobody bought meat there, they went over to the Meat Market. I was one of those who would run into the Main Street Market only when I absolutely had to, i.e., we had unexpectedly run out of milk. The manager of the store sarcastically called people like me the Sunday Shoppers, because any other day of the week, we'd go somewhere else if at all possible.

Main Street Market finally succombed and closed its doors last summer. The bank bought the building and is doing an extensive renovation. The bank will be using half the main floor space, but the other half, and the whole second floor (a superb space, all open, would make an awesome studio or maybe an antique store if it had a freight elevator), are open for lease.

There's a group in town who are frantically trying to line up somebody to run a grocery store out of the second main floor half. I went to an early planning meeting with an open mind, but when I realized just how much money they needed and how iffy the whole business proposition would be, I decided to have a talk with Alan. I asked him to tell me honestly what he could not offer that the town needed badly enough to open another grocery store. He said he couldn't think of anything. He is limited on space, and he is not interested in expanding at present, but he is willing to get anything anyone wants if they can wait a couple of days, and his selection is really amazing for the space he has. His prices are on the high side, but still a better value than the Main Street Market's ever were.

My conclusion was that the only thing the City Meat Market was missing was Sunday hours, and I'm willing to work around that to see Alan and his family at church every week. I respect their decision not to do business on Sundays. And I am no longer supporting the push to get another grocery opened. It just doesn't make good business sense to me. It's caused some hard feelings with good friends of ours who can't understand why Barry and I aren't leaping on board with the whole New Albin Grocery plan.
Posted by Maria Stahl at 8:41 AM 3 comments:

More Stuart for a sanity break.

Stuart Goes to the Therapist


Stuart Gets his Picture Taken


Stuart and the Too-Small Swimsuit

I actually got these a few weeks ago but forgot to blog them.

First is this cute wicker doll cradle. The bottom was busted out but that was an easy fix. 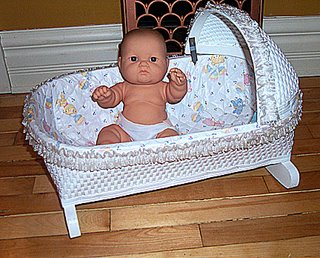 And then there is this doll carriage. One wheel was off, which was easy to put back on, and then the awning was gone, but the wire framework was still there, so I made a replacement. 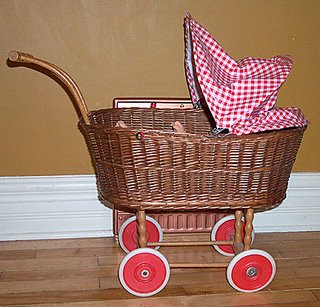 That little feller in the cradle is not a thrift store find. He came off eBay, but he's also still available in the stores, I think. He's a little Berenguer. He's very cute.
Posted by Maria Stahl at 6:02 PM 2 comments:

First, this just in from the BBC:

Next, some bored British SAS troops in the desert:

I don't know why I like this one, except that babies are cute, even baby sloths.

Next, I have a gazillion episodes of Stuart, but here is just one:

And finally, a classic from PeeWee's Playhouse: All the things you can do with a pair of giant underpants.