Anybody want to split a beef order? 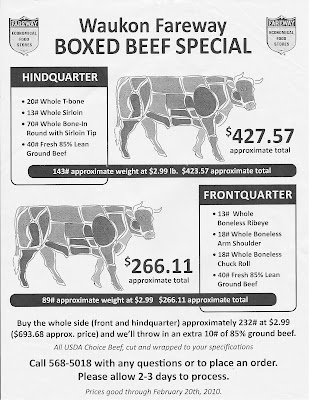 A beautiful old house for sale in New Albin 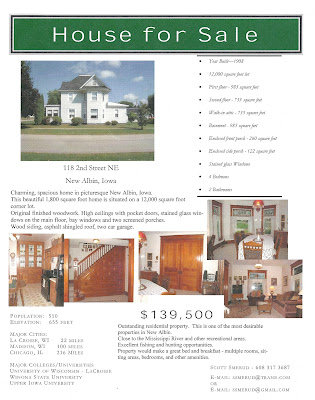 Anybody near Kansas City need an authentic Craftsman era davenport?

I've been watching this one for a good while now, from the first time he listed, through this relist which is about over. It would date to right around 1918. I have two of these in my living room: Kroehler KoDav loveseats that fold out to a 3/4 sized bed. I wish I could have this one, too. Dunno where I'd put it, but I could be a KoDav hoarder so easy. And for $99! Whew!
The oilcloth is original and not really in terrible shape, considering. My Kroehlers have that underneath their more recent upholstery jobs, too, and they were in much worse shape. If you can't live with it and you can't find brown oilcloth to replace it with, go with leather. I did that for one of mine. I bought a full hide on eBay for around $75 and just cut it to size and stapled it over the existing upholstery and it looks nice. The other was recovered somewhere along the line with red marbled Naugahyde and Barry likes it so we're keeping it, at least for awhile.
Anyway, if you can snag this one, do so. If you do, let me know and I'll tell you what I did for a replacement mattress.
Posted by Maria Stahl at 8:07 AM No comments:

An interesting thought on angels, or rather our image of them

A commenter on Cinematical.com, writing about how angels are portrayed in popular culture, wrote this:

I've observed that archangels are usually portrayed as wearing Roman armor (with wings) because that was the ultimate warrior's armor back when the Bible was consolidated. However, during the middle ages, often, archangels were shown as knights in a suit of armor (with wings). That tells me that a modern version of an archangel should show them dressed in kevlar and looking very much like a modern infantryman in Iraq (with wings). Coincidentally, Iraq is where all this stuff about angels and demons got started.

Posted by Maria Stahl at 7:22 AM No comments:

Pat is being hilarious again. Go read it.

A note: Pat Rothfuss' blog is one of the highlights of the secular side of my life. He's a fantasy writer AND a humor writer AND a college professor AND a new father. He's an interesting character, and he's from just over the river (well, Stevens Point, Wisconsin), and I really like him. In fact I have one of those weird Internet nonrelationships with him where I think he's my friend but if he actually met me he would a) have no clue who I am and b) wonder just a teensy bit about stalkers. BUT HE WROTE ME AN EMAIL!! Actually he answered my email, which was a very nice thing to do, but it doesn't make us friends. *
I wrote to him the first time after reading the opening pages of The Name of the Wind, his fantasy novel. An early scene takes place in a tavern filled with the locals. I knew Pat was a Wisconsin boy, which probably helped my mental picture of the scene, which put all these pseudomedieval types in feed caps. I wrote him to tell him so and he wrote right back to say he could see it too.
I love it when an author ** actually writes back!
Anyway, the link above, if you haven't already clicked on it, is Pat developing a scientific method to actually quantify the coolness of any given person. He has dubbed it the Gaiman-Day unit, named after the King and Queen of Cool (even though they're not married), Neil Gaiman and Felicia Day. Wil Wheaton, or at least his Lego avatar, makes a special guest appearance in the piece. See? Something for everyone.
* reminder to self
** Kij Johnson does that too. Writes back. Cool. So does John Erickson, of the Hank the Cowdog series. And I once got a personal, handwritten, and heartfelt letter from James Herriot in response to a question I had asked him.
Posted by Maria Stahl at 6:57 AM 1 comment:


My old and trusty LG3200 Tracfone flip phone got itself fried in the car charger a few weeks ago, and I replaced it with an LG 100 candybar style phone. I love this phone! It's sturdy, easy to work with, has great audio and the battery life is amazing. I just recharged it after a WEEK AND A HALF of constant use and no charging! That's how long it took to run down. I have never heard of such a thing.
Posted by Maria Stahl at 3:22 PM No comments:

A couple of earthquake stories from CNN

Baby Vinson, named for the ship on whose deck he was born, thanks to the US Coast Guard:

And this brought back pit-of-the-stomach, monkey-brain fight-or-flight memories for me:

Posted by Maria Stahl at 7:01 AM No comments:

Posted by Maria Stahl at 6:48 PM No comments:

Yesterday, January 17th, marked 125 years exactly from the day that a bunch of German immigrant farmers formed our church, which is now St. Peter's Christian Community Church. And of course we celebrated with a potluck. That's what we do. Our church definitely has the spiritual gift of potlucks.

In a crock pot was the most delicious-looking pasta dish. It looked like it might be sausage and pesto sauce. I had a serving of it, then went back and had more, and then so did everybody else because it was DELICIOUS! It's only fair for the church ladies to put their names on their crock pots in freezer tape so you can identify the maker. I mean, it's just good form, right? This crock pot was brand new and had no freezer tape on it. We were all asking each other whose it was, because we all wanted the recipe for this wonderful dish.
Finally Karen Leppert, one of our organists, casually walked over and picked up her now empty crock pot, and we all pounced. She was surprised that we loved her hotdish so! But she agreed to share the recipe.
Here it is as she gave it to me. It doesn't look like much, but trust me, it is. Use the spinach. She used penne for the pasta. I think when I make this at home I am going to try it with ground turkey and ground turkey sausage rather than beef for lightness.

By the way, I'm trying out a new recipes widget from keyingredient.com. What do you think?
Posted by Maria Stahl at 8:26 AM 1 comment:

The Life Cycle of the Bean

European starlings at the feeder 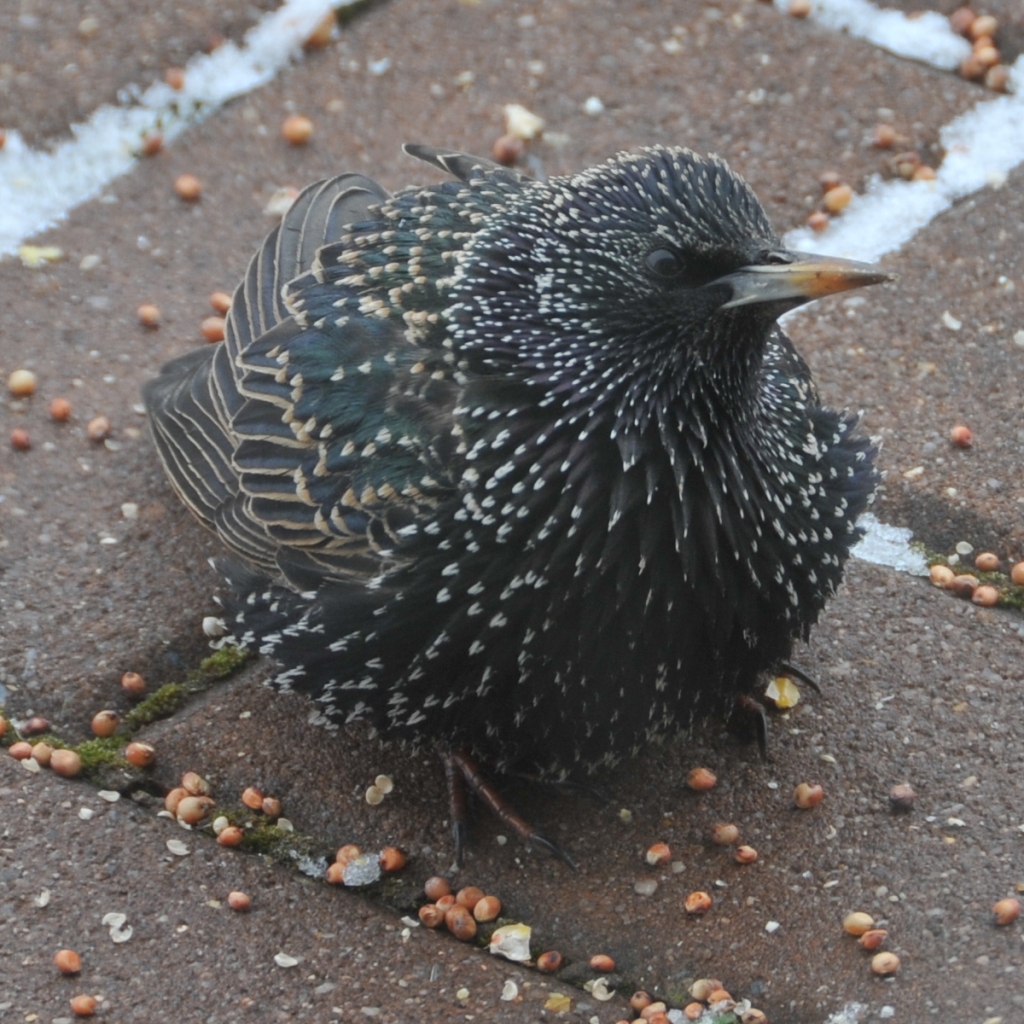 Image courtesy TolWeb.org
I need to get more suet, as the suet bag has become a very popular feeder at my yard. Lately some beautiful dark brown birds with light brown feather-tips have been chasing everybody else away, then tearing into the suet with their very sharp bills. Mom pointed me in the direction of some sort of starling, and sure enough, it's a European starling, in the winter plumage. (That's not my picture, that's one from the Web.)
I know that I get excited over boring, non-rare birds, but they are still special to me, and I'm always flattered when they choose MY feeders to visit.
Posted by Maria Stahl at 10:07 AM No comments:

Curious to know how many people are following your blog?

I found a little trick to get the number of people who are following my blog. In Google Reader, unsubscribe to your own blog, then it will tell you how many people subscribe and how often the blog is updated. Then resubscribe. Mine has 30 people following. Let's see: Me, my mom and dad, my brother, my sister - and a few more of you. :o)
Posted by Maria Stahl at 6:43 PM No comments:

Long time, no update.
Barry is home safely and his dad is doing pretty well. Not great, but reasonably well, and improving all the time, hallelujah. Barry himself had some chest pain last week one night and very high blood pressure and ended up in the ER there near where his parents live, but wouldn't stay, and so tomorrow morning we're going in for a checkup. It scared me and good. Life is tenuous even when we think we are invincible.
Right at this very moment we are hunkering down in our house with our pets and our children, candles lit, the geothermal system pumping as hard as it can, as it got to 14 below 0 (that's Fahrenheit, by the way) last night and may get nearly that cold tonight too. I just took a couple of loaves of bread out of the oven and they smell wonderful. Barry and Lil Miss A are making pizzas for supper. The two kids go back to school tomorrow, though Barry has a couple more weeks of break to go. Life is momentarily peaceful.
Posted by Maria Stahl at 6:34 PM 1 comment: