Analogies I would never have thought of myself

Here is a list of what are purported to be the 25 worst analogies ever created (found in papers by creative writing students). You may find them horrible. I myself think they are wonderful. In fact a few border on brilliance. Enjoy.
Posted by Maria Stahl at 2:30 PM No comments:

Note: I'm posting this here mostly so I can find again next time I need it.

GHF is still with me. My second postop checkup was this morning. I got my stitches out, finally, and had x-rays, but he said it's too early to graduate from the giant cast boot. *sigh* When I told him the relatives were coming to MY house for Thanksgiving, he kind of groaned and said I'd better accept all the help I'm offered and not feel bad about it, because he could tell by how I'm healing that I've been on my foot too much as it is.

X-rays seem okay, though, so that's a plus.
Posted by Maria Stahl at 3:20 PM No comments:

Where do they sell this mirror? 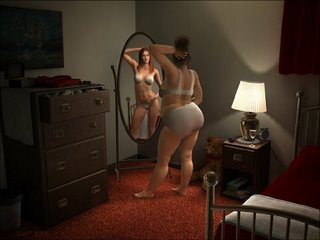 Roseann Stahl sent me this in an email titled, "Can you check your Wal-Mart for me?" She's trying to find the one that sells this mirror. :)
Posted by Maria Stahl at 2:14 PM 2 comments:

My sister called yesterday to ask how I and the Giant Hilarious Bandaged Foot were getting along (the answer is, fine) and to tell me the 40,000 things they had to do over the weekend. Then she said, "I'm thinking about declaring tomorrow to be Pajama Day."

She explained that Pajama Day is a day when everybody stays home, stays in their jammies and just kicks back, eats, wallows around and does nothing critical or time-sensitive. In short, they relax, regroup and restore themselves. She homeschools her son, and her husband owns his own landscaping firm, so Pajama Day means no school and usually also means it's raining and Vann is off work for the day. They loll around, make a fire, put together models, surf the Net, eat and play with the dog.

It sounds wonderful.
Posted by Maria Stahl at 10:49 AM 1 comment:

I think my surgery went okay. They had us there ridiculously early, but on the plus side, they actually gave me a hospital room, one with cable TV, so I switched between Animal Planet (a very interesting show about baby rhinos) and Sci-Fi (something incomprehensible where a guy sees things in black and white) for a couple of hours. Then they took me in for surgery and I remember the BP cuff going on and the pulse oximeter and then people laughing and saying I was all done. Total blackout between them. Then we had to wait another two hours back in my room. Barry was threatening to refuse to leave if 8:00 came and we were still there, so we could watch Battlestar Galactica, but they kicked us out about 7:15. So we were home by about 8:00. The kids were glad to see me, Master K had fixed up the guest room for me very nicely, and I took my Percocet and went away to la-la land. This morning I'm not hurting, but I am swollen, and that makes the CAMboot pretty uncomfortable.

The animals are so worried about me. The cats come sit on me and look imploringly into my face for reassurance. Last night Bo was acting totally normal until he smelled my bandage, then his ears and tail drooped and he walked over to Barry and put his head in Barry's lap and looked miserable. He didn't want anything to do with me the rest of the evening. (I went to bed early, but Master K said he was sad all evening and every time anyone said "Mom" he would kind of cringe.) Today he keeps coming to find me and puts his nose on me and looks sad and worried. They are so sweet.

I'm reading, computing and stitching on a Grandmother's Flower Garden quilt here with my foot up on a stack of pillows.

Miss B went to Kayla's mother's wake after school yesterday. Most of the school faculty was there, as was a large chunk of the student body.

My parents told us of another young lady who lost her father this week. They had already lost her mother some time ago, and she and her father were farming in Northern Wisconsin. Now she has neither parent. She is only 14, yet she wants to keep farming somehow. I have no idea how she could manage it. Anyway, please pray for comfort and rescue for this young lady, too. Her name is Anita.

P.S. I must still have Percocet in my system. I have edited this post twice now and still am finding typos!
Posted by Maria Stahl at 1:16 PM 2 comments:

Her life will never be the same

Yesterday morning one of the young ladies of our town, a junior in high school, found her mother on their bathroom floor, dead of an apparent aneurysm. Kayla's father lives in another city.

Please remember Kayla in your prayers today and in the months to come as she figures out what the shape of her life is to be. Please pray specifically for a personal relationship between her and her Heavenly Father, who cares for all orphans.
Posted by Maria Stahl at 10:14 AM 1 comment: