First "real snow" of the season

That is, if you define "real snow" as "snowfall requiring snowplows." 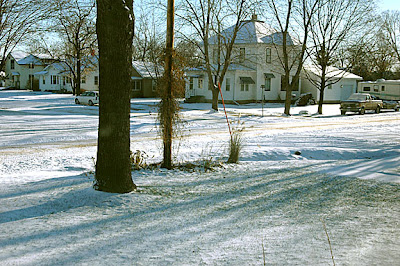 It's an unusual first snow: It's powder. Temp is only 12 degrees Fahrenheit, so it's light, blowy snow. I didn't shovel, I swept.
Posted by Maria Stahl at 9:23 AM No comments:

Obsessing over the Phone Bill

We are a family of 5. We have a land line telephone with the phone cooperative, long distance with an 800 number through a third-party long distance company, four Tracfone cell phones and high-speed Internet through our cable company. The costs have crept up as we got more and more used to all this connectivity. Now that everybody on the planet has a cell phone or two, we have all become accustomed to instant access to anyone, anytime, anywhere, and we are mystified when we cannot reach someone in a moment. "I left a message, she'll call back" just doesn't do it anymore. No, now it's "Why isn't she picking up, already?? Where is she? I want her NOW!" And when I can't instantly get hold of one of my children, I don't like it. Not a bit.

Things came crashing down the other day when one of the Tracfones broke and Barry took a look at our usage. I keep obsessive records on our Tracfone costs because I know at some point there will be a tipping point when we would be better off with a regular cell phone plan, and I want to know the exact moment when that point comes. So when Barry asked for a report on who was using how much Tracfone time and costing what, I was able to pull up the Excel spreadsheet and tell him. Suffice to say that the person with the broken Tracfone had just plain worn it out. That person's usage was more than the rest of the family's combined. And I ain't sayin' who she is. Only she's very tall, and she's brunette, and she's not me.

Miss Tall and Loquacious is going to get her own Tracfone and be responsible for the minutes herself, and the rest of us will just coast on the minutes we have and see how it goes. We shouldn't need to buy any for quite awhile if she is counted out of the equation. But even with her usage counted in, we were running 4 cell phones for about 70 bucks a month averaged over the past 12 (and that includes buying 3 of the 4 phones), with a lot of the usage being text messages, and we couldn't touch that with any of the plans we found through conventional cellular carriers. But it put our total communications bill (counting Internet) over $160 a month! Augh!

I know, I know, somebody out there is going to say, "Lose the land lines, just go cellular." It's not a good choice for us, living where we do, where cell coverage is very patchy. It's not acceptable to me to constantly be dropping calls.

Then, the marketing people at Mediacom, our cable company, shrewdly picked this week to call and offer us telephony through their cable lines. We knew this was coming but had always been hesitant simply because Mediacom tends to have technical problems in our town. But those problems have been less and less as they replaced aged cable and switches, and service has not gone down since the middle of the summer, if I remember correctly.

They offered us local and long distance phone service, keeping our old phone number, for $9.95 a month for the first 6 months, then $29.95 a month thereafter. After we thought about this a bit, we decided to go for it. When I called back today, they had an even better offer: A penny a month for the first 6 months and $29.95 a month thereafter! We don't lose our phone number, we get unlimited calls to people we care about all over the country AND our long distance carrier said we can still keep our 800 number through them even though the bills will be so small that I wouldn't think they would even want to bother with us anymore.

So our land line costs are going from $65-65 a month down to about $15 a month for the first 6 months and then about $45 a month after that. Definitely an improvement.

What's the best deal you can get on phone service? How do you make it work with a budget? Discuss.
Posted by Maria Stahl at 8:35 PM 2 comments:

Can you believe some people still have not tried eBay?

I thought in this jaded world of e-commerce, the only people who had not yet used eBay were still in their basinettes, but this Christmas shopping season I am selling to more newbies than in a long time. I sold two loaf pans to a nice gentleman who had registered on eBay for the first time in order to buy them for a friend. He was so cute: He put in a Best Offer at my asking price. :o) Needless to say, I accepted it.
Posted by Maria Stahl at 11:48 AM 1 comment:

A pollster caught me by phone this morning

I just took a call from a national opinion pollster. The questions were interesting, at least to me. Here, as best I can reconstruct them, they are:

1. Are you a registered voter? (Yes.)
2. Do you consider yourself philosophically more Republican, Democrat or Independent? (Republican.)
3. Do you strongly oppose Bill #????, the Right to Work Law, which states that no worker shall be required to join a union or trade guild in order to gain employment? (Never heard of this before so cannot state an opinion.)
4. Do you strongly oppose all new taxes? (Of course not. Duh. Only I didn't actually say the "duh" part.)
5. Do you strongly oppose all gun control laws including restrictions on handgun use? (No! Again, duh.)
6. Do you believe that abortion should be illegal in all states and in all circumstances except to save the life of the woman? (No. I didn't add that I believe in a moral society this would be a nonissue, but I do not believe that you can legislate morality in most cases. People without morals won't care about the laws anyway.)

Just oddly stated questions, I thought. I always wonder what they are getting at in these things.
Posted by Maria Stahl at 9:47 AM No comments:

The 9 Most Badass Bible Verses

Read this from Cracked.com.
Posted by Maria Stahl at 12:52 PM No comments:

Our son was baptized today

What's Daddy got? Is it a sandwich? 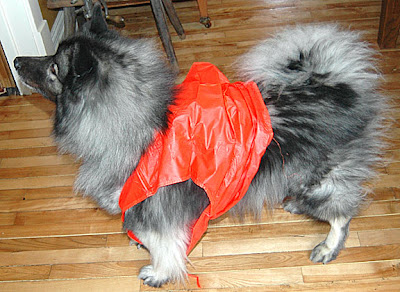 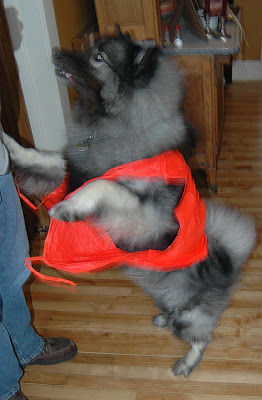 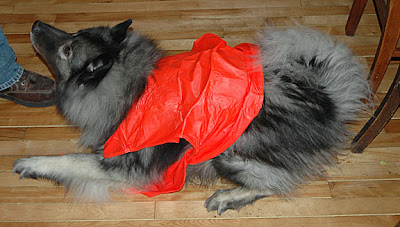 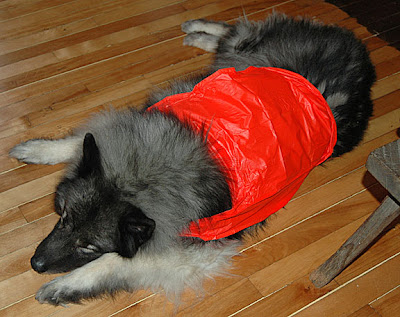 All tired out now. 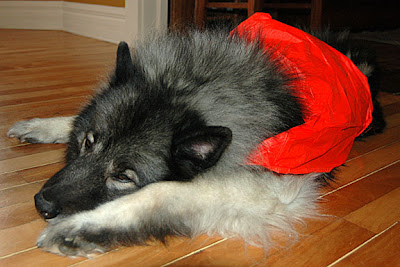 Anyway, I was worried that Bo would pick today to escape and would get shot, so I gave him a blaze orange vest. He actually seems rather proud of it!
Posted by Maria Stahl at 5:20 PM No comments:

I bought this beautiful silk robe for 99 cents on eBay. The sash was missing, and although the seller's description was accurate and good, the picture was awful, so nobody else bid.

I used a piece of gorgeous silk brocade in a color picked up from the hand embroidery to make a replacement sash. The original sash was probably turquoise but I didn't want to try to match the colors. 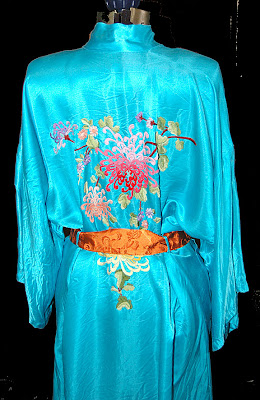 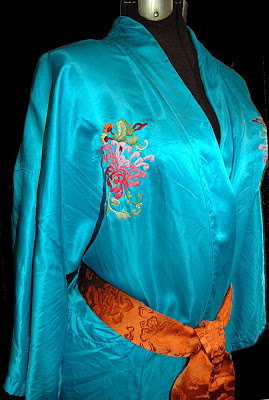 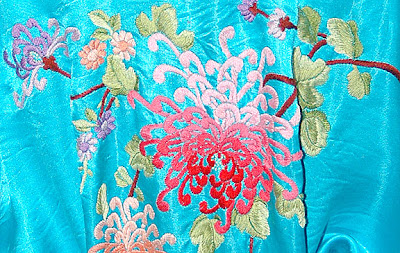 Take a look at this lovely hand embroidery work. The time that went into this!
Posted by Maria Stahl at 2:41 PM No comments:

Posted by Maria Stahl at 2:39 PM No comments:

Declined as a seller on Amazon.com?

I'm curious to know if anyone knows why Amazon.com might decline someone as a seller. They won't give a reason and they won't let you reapply. I don't believe it's based on one's credit report, as any time someone declines you for something based on that you are entitled to look at your report for free, and they did not offer me this. I have been buying on Amazon for a long time, and selling on eBay for even longer, so I think I would be a reasonable Amazon seller too.

If anyone has any insight on this I would appreciate your discussing it in Comments.
Posted by Maria Stahl at 12:04 PM No comments:

I am Ruler of the Univerrrrrse! 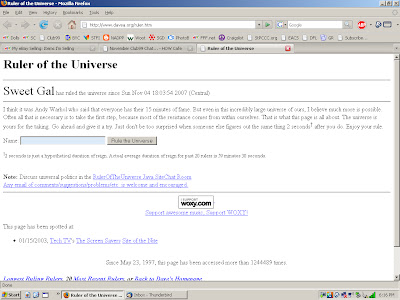 Thanks to the Cat Grannie for this moment of fame.
Posted by Maria Stahl at 6:20 PM No comments: 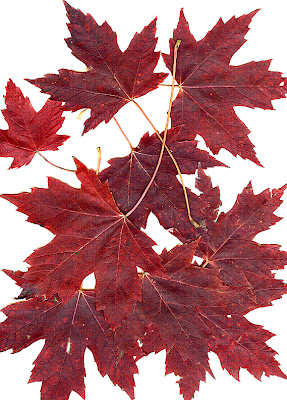 Our little baby sugar maple exploded into brilliant color this past week. It went from mostly green to dumping-scarlet-leaves-all-over-the-place in the span of about 6 days. I scanned some of these lovelies to share with you.
Posted by Maria Stahl at 6:47 PM No comments: