Countdown to the start of BSG 3.0.
Posted by Maria Stahl at 10:00 AM No comments: Links to this post

1. What made Apollo and Starbuck hate each other so bad?
2. Conversely, what made Starbuck and Tigh so buddy-buddy all of a sudden?
3. Is it just me, or does baby Hera/Number 13 look awfully delayed for a supposedly 12- to 13-month-old child?
4. Why is it always human males being seduced by gorgeous Cylon babes? Where are the irresistably gorgeous male Cylon models? (Wait, I know the answer to this one. BSG's producers/writers just know who they are writing for.)
5. Am I overthinking things here?

Two from Beckham the Cat:

Master K. had to do a science project of an insect collection. He had collected 25 specimens and carefully mounted them on a board. Unfortunately he did not put the board out of reach of the cats, and they discovered it and ATE several of his specimens! He was livid, of course. After carefully replacing the specimens, he stashed his board high on top of a bookshelf.

The next morning we heard Beckham walking on the piano keyboard, back and forth. Master K. had a look and reported that Beckham was trying to figure out how to get to the top of the bookshelf from the piano. Master K. lifted him down and lectured him on the evils of eating someone's homework. He said that Beckham listened carefully, and then he made that little "mrowr? mrowr?" sound that he makes when he wants someone to do something for him and looked very pointedly up at the bookshelf. Master K said, "He ASKED me to get it down for him!"

Another Beckham story: This morning Master K. came into the kitchen and asked me if I knew that sound Beckham makes when he's trapped somewhere behind a closed door and needs someone to come let him out. I said I did. Master K. reported that Beckham was in the front window, making that sound at people he saw walking down the street. He was saying, "Help! I'm being held prisoner in this house! Lemme out!"

And finally Janie the Lovebird is very lonely, so I bring her downstairs where she can see more stuff going on in the house sometimes. (Otherwise she's alone in the girls' room all day.) She is a very sociable little thing, and every time she hears a strange voice she gets very excited and calls and shouts for the new person to come see her. That includes voices she hears on 1) the television, 2) my computer or 3) the doctors dictating when I can't stand my headphones and have to take a break and just listen to them through the speakers. She's so cute!
Posted by Maria Stahl at 9:44 AM No comments: Links to this post

A movie opening soon - watch the "teaser trailer" first if you don't mind.
Posted by Maria Stahl at 12:27 PM 1 comment: Links to this post

The opening scene of House just showed a white lab rat starting to munch on the researcher who was working with him, after the researcher had just keeled over on the floor with the Mystery Disease of the Week.

Okay, listen, scriptwriter(s): That just wouldn't happen, okay? Unless it was an absolutely STARVING rat.

Thanks, people, for playing to the illogical fears of all the uninformed rodent-haters of the world. Thanks a lot.
Posted by Maria Stahl at 7:11 PM 1 comment: Links to this post

Cream of Carrot Soup with Curry

I just made this up.

Cut up 2 lb. carrots into chunks. Cook covered in as little water as possible till tender. Drain, reserving cooking liquid.

Slice one onion into a large soup pot. Saute onion slices in butter or olive oil till tender.

Place drained cooked carrot chunks in a blender and add half and half, milk or a combination, enough that you can blend the carrot chunks smooth. Add some curry powder, more or less to taste and blend some more. Add the sautéed onion slices and their drippings to the puree and continue to blend. Add the carrot cooking liquid. When the mixture gets to be of such volume that it’s too full for the blender, return it to the soup pot, and simmer and stir, adding milk or half and half as needed to thin it. Season to taste with salt and perhaps some white pepper. Do not boil; just simmer. Serve hot.
Posted by Maria Stahl at 6:15 PM No comments: Links to this post

At last! It's here once again!

International Talk Like a Pirate Day, but of course you all knew that, because you all had it on your calendars, right?

No, the Irony Has Not Escaped Me

Meanwhile I am stripping wallpaper from the second floor stairwell.

And when I say "meanwhile," I really mean "simultaneously." As in, "while the new paper is booking for 3-10 minutes depending on whose instructions I'm going by, I'm scraping old paper in the stairwell, and then I squirt DIF on more old wallpaper and race back to the guest room to apply another strip of paper while the DIF sits for its requisite 20 minutes of glue-softening time."
Posted by Maria Stahl at 9:39 PM 1 comment: Links to this post

Remembering the Battle of Flight 93

I have to say I appreciate how Citizen Smash is remembering the events that occurred 5 years ago today:

2001 - The Battle of Flight 93: Passengers rebel against al Qaeda terrorists, forcing them to crash a hijacked plane in an empty field near Shanskville Pennsylvania, preventing the likely destruction of the U.S. Capitol.

It is easy to lose our courage over the fierce wounds our nation sustained that day, and fail to remember the courage of those who won their own part of the war. Hail, heroes.
Posted by Maria Stahl at 1:29 PM No comments: Links to this post

Happy Anniversary, Mama and Papa. Fifty-two years, what an inspiration to those of us just getting started. We love you.
Posted by Maria Stahl at 8:26 AM No comments: Links to this post

The Most Wonderful Time... of the Year 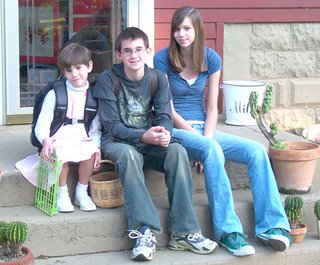 I just dropped these three off after the obligatory Camera-Mad Mommy Back-to-School Picture on the Front Steps (I wasn't the only one, Jane Meyer had her kids lined up out in front of her house, too). Our school district did some major remodeling over the summer and the buildings smell so good. I love the smell of a school that's reopening after the summer anyway, and combine that expectant sort of smell (I think it's a combination of old wood and floor polish, with a little disinfectant mixed in) with the scent of new paint, new office furniture and fresh vinyl flooring, and MMMMmmmmmMMMmmmmm it's invigorating!

I know January 1st is really the new year, but for me, the year always begins with school.