Divided by a Common Language

Backstory: Our guests at Thanksgiving dinner included my parents, who are Messianic in faith, and Victor Kiyung, a college student from Viterbo University, originally from the Cameroon, West Africa (and with a pretty heavy accent). At dinner, we were talking about things we were afraid of, and Victor said he was afraid of rivers when he came to LaCrosse, and living right on the Mississippi, he determined to conquer that fear right away.
This morning:
Lil Miss A:  Mom, what's a rabeye?
Mom: A rabeye? (notices A is playing with her digital camera) You mean "redeye"?
Lil Miss A:  No, a RABEYE. RAB EYE.
Mom: A rabbi?
Lil Miss A:  Yes, a rabbi.
Mom: In the Jewish faith, it's a minister. Grandma and Grampa sort of have a rabbi for their minister.
Lil Miss A: Do they kill Africans?
Mom: WHAT??? What are you talking about?
Lil Miss A: Then what is a person that kills Africans?
Mom: What?! I don't know! Who's killing Africans?
Lil Miss A: Victor said he was afraid of rabbis!
Mom: NoooooooooOOoooooo, he said he was afraid of RIVERS!
Posted by Maria Stahl at 10:43 AM 3 comments:

It's been a long time since I published one of these! That's because of the things that were getting finished, I wasn't the one doing the work, and I couldn't really claim them. Anyway, now that the kitchen is basically put together, with just finish work remaining, it was time to get out a Wilendur strawberry tablecloth I had been saving for years, and make 1) curtains for the cabinet underneath the sink and 2) roller shades for the window. 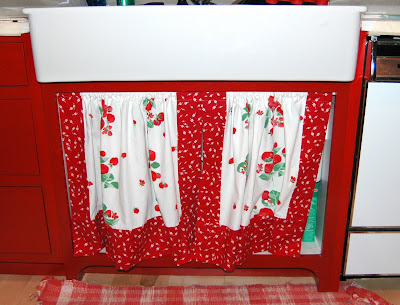 Here's the curtain beneath the sink. 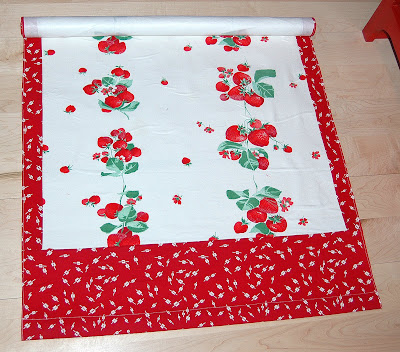 And here's the shade, lying on the floor because I do not have permission to hang it in the window until the trim is all in and the frame painted.

I love those old heavy cotton printed tablecloths. They are very substantial and the colors last and last. You almost have to try to get them to fade.

For the backing of the roller shades, I used Pellon Decor Bond fusible heavyweight interfacing. The best price I found was on eBay. This is an iron-on product that stiffens the shade and lines it simultaneously. It was pretty easy to handle, though it did not want to fuse without a LOT of heat. Thankfully the tablecloth could take it.

The red with white print is discontinued and I wish I had bought more of it.

Posted by Maria Stahl at 8:00 AM No comments:

One of the fun things about new cabinets 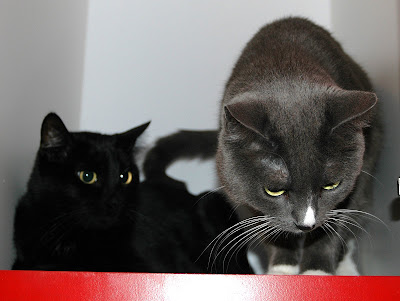 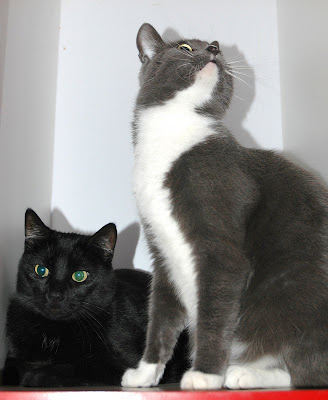 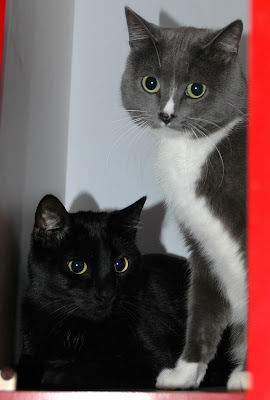 You can get inside them and lurk.
Posted by Maria Stahl at 8:07 PM 5 comments: 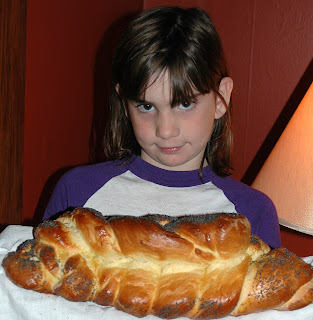 This is old news. I forgot I had these pictures on my camera card. Right after we got home from visiting Grandma and Grandpa Root in St. Paul last time, Lil Miss A wanted to make challah bread. She made this delicious loaf with my supervision. She did it all, though.
Posted by Maria Stahl at 7:26 PM No comments:

I think I actually started an Internet meme!

I am pretty sure I did start it. I never saw it done before I thought of it, I have been doing it for a couple of years, and now I'm seeing it done by people who have probably never heard of me.

You know those nonsense word verification "words" that you have to retype to post on many blogs, mine included? Supposed to foil the spambots? Well, I started making up a definition at the end of my posts for those jumbledegook "words." I gave myself extra points if the definition actually related to the comment or post.

I just visited Patrick Rothfuss' blog and found that EVERYBODY is doing WV "words" now. His readership is on the whole rather brilliant, so they are GREAT words. Here's a superb example:

Word verification: Vingulat, as in Count Vingulat. The first royal to marry someone who wasn't a member of their own family.

Of course I can't prove that I started all this, but I really think I can claim it as my own.

Posted by Maria Stahl at 7:36 AM No comments:

I just took out Bo's stitches

and his wound is healing very well. Nice and clean and closed. Now he wants to mess with it even more, but I'm watching him.
Thanks to God and to Dr. Marc Miller.
Posted by Maria Stahl at 8:28 AM No comments:

Giving my Butcher-block Countertops Some Love

The countertops to either side of the stove are chunks of rock maple butcherblock, from an 8-foot butcherblock baker's table I bought years ago at an auction. John Pitts' team cut it up and planed it and sanded it, but it was left to me to season it.

I rubbed 2 coats of food-grade mineral oil into the surfaces, leaving about 6 hours between applications for it to soak in, and then this morning, at the recommendation of a website I cannot find right now, I grated up some pure beeswax into a saucepan, added an equal amount, approximately, of mineral oil, and warmed it over the stove while stirring to melt the beeswax. I put a thick coat of that on the wood, left it for about half an hour, and buffed off the excess with a soft cloth, and now I have one more coat on it. The wood is saying THANK YOU!! by being beautiful and smelling great.

I think I'll save my application cloth and substitute it for the yucky old grease-rag I use to wipe my cast iron after I dry it on the stove.
Posted by Maria Stahl at 4:16 PM No comments:

Working on a Thanksgiving weekend menu

It's complicated this year - more complicated than usual. Still fun!
This is why I have to plan the whole weekend's meals out in advance and not try to wing it. I'd never make it out alive. :o)
Posted by Maria Stahl at 10:42 AM 2 comments:

Miss Gultch and the Wicked Witch of the West - and 600th post! 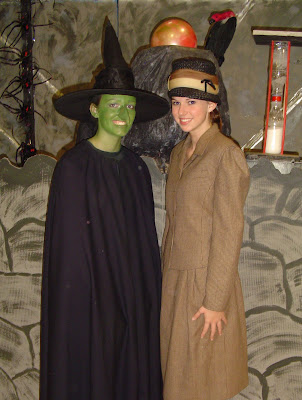 That's M.K. on the left, as the Wicked Witch of the West, and Miss B on the right as Miss Gultch. Supposed to be played by the same person, but there was no time to get Miss Gultch green-ified in the short time between her last appearance on stage and the first appearance of the WWotW. Besides, if I didn't know better, I would suspect M.K. of being Miss B's twin, separated at birth. They look a LOT alike. Built alike. Walk alike. They even swapped places one day for classes. 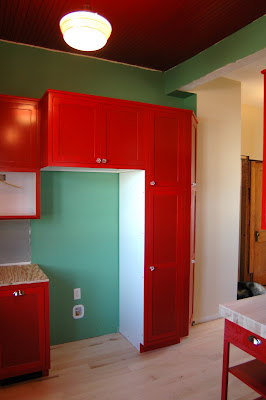 The cabinets are all in! 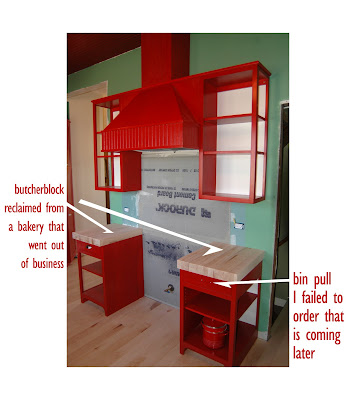 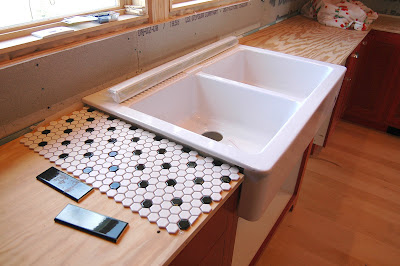 The sink is just stuck there, not hooked up or anchored or anything. Also the tile is just laid there on the plywood so I can dream about how pretty it will look someday. 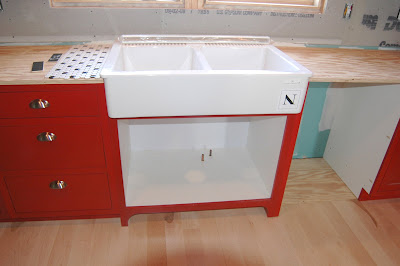 That's the famous IKEA Domsjo apron front sink, and that is NOT an IKEA sink base. It's one John Pitts built. It fits beautifully. 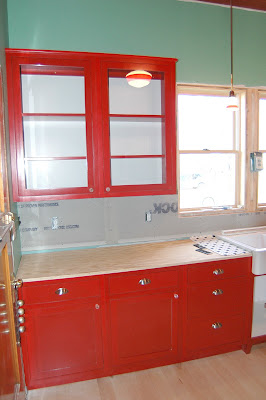 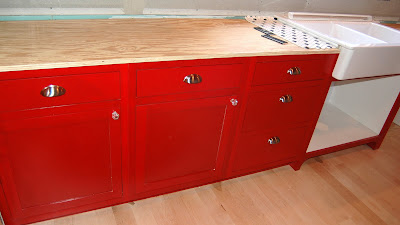 By the way, sometimes the ceiling lights show up yellow in my pictures. They aren't. They are white, with a wide red band painted around them.
Posted by Maria Stahl at 1:49 PM 2 comments: 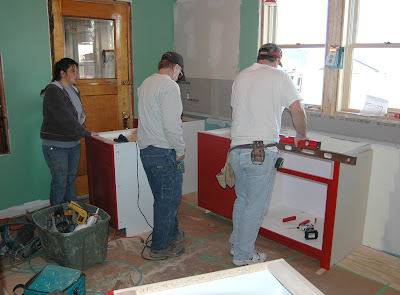 That's right! It's Cabinet Day. Or, Cabinet Day #1. But these folks work very efficiently and they may just get most of it done today. It's so fun to see the design I had tried to imagine appear before my eyes. This kitchen is going to be so much fun to cook in. 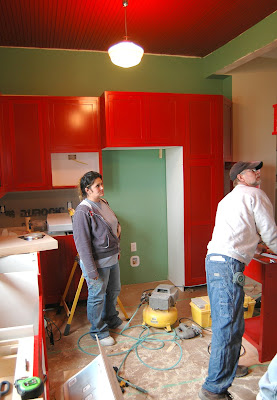 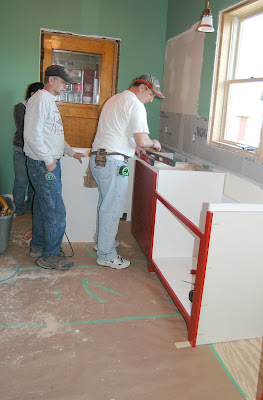 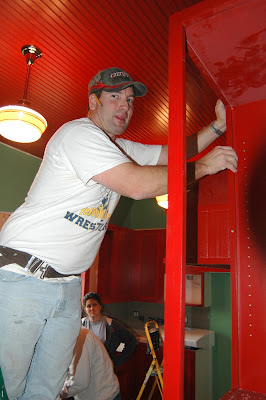 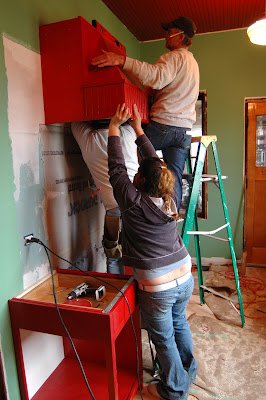 "I can explain all this."

A sentence that strikes fear into the hearts of mothers and wives everywhere.
To backtrack: Over the past 5 days, we have done 4 shows of the Kee High Drama Department's production of the musical "The Wizard of Oz."  Everything went really well.  The kids nearly killed themselves preparing, and it showed - the scene changes were smooth, the lighting and sound unobtrusive yet effective, the pacing excellent. I played in the pit orchestra. Miss B had 2 parts, Miss Gultch and a citizen of Oz, while Master K had 3 parts - a Winkie guard, an Oz guard, and a scary tree in the Haunted Forest.
So anyway the last show was a Sunday matinee. The two older children and I made our triumphant return home only to be met at the kitchen door by
Bo's head was in a box because Barry needed to keep him from messing with the GIANT CUT in his side and did not have an Elizabethan collar handy. As it happened, Barry let Bo out for a yard break, and Bo took off like a shot toward the garden, turned his head to look at Barry without actually slowing down, and slammed into the trailer to one of the sailboats, slicing his side on the sheet-metal fender of the trailer. Barry didn't realize Bo was hurt for probably 10 minutes, as Bo did not yelp and didn't want to come back in the house. Barry finally realized there was blood on the back step, and in the darkness he could not see where it came from. Finally he and Lil Miss A found a full-thickness, L-shaped cut or tear in Bo's flank. By the time I had gotten home, Barry had clipped the hair away and washed it with Betadine and was trying to get a bandage to stay on it to hold it shut while he figured out what else to do, but the bandage kept coming off.
Barry thought we might be able to SuperGlue the cut closed. I borrowed some SuperGlue from our neighbors, then we settled Bo down and removed the bandage. As soon as I saw the cut I said, "That's it, we're calling the emergency vet." I had not realized how deep it was before I saw it for myself. It's clear through but not into the muscle layer. It kept gaping open, and it was seeping blood.
Thankfully our wonderful vet in La Crescent, Dr. Marc Miller, met us at the clinic 45 minutes later and took care of Bo right then and there. He started by giving him IV sedation, then intubating him and giving him gas. Bo had a seizure as soon as the IV ketamine took effect, which scared me good; I thought we might lose him right then and there. But his heart was strong and he came out of it fine. Once he was sedated and intubated, Dr. Miller checked him more thoroughly, noting that he had bitten his tongue pretty hard, probably at the impact, which may be why he did not yelp at the time.
It took 4 deep dermals and 7 subcuticular stitches to close the tear. Bo got subcutaneous antibiotics and then Dr. Miller woke him up and we bundled him into the car and took him home. He had a real E. collar by that point.
He had a rough night, and so all of us did, too, but he's doing better today - well enough to be intensely embarrassed by that collar! He keeps pleading with me to take it off. The cut looks clean and dry and Bo was anxious to eat breakfast this morning.
So all will be well soon.
And I have songs going through my head from the Oz score, and probably will for some time to come, whether I like it or not.
Posted by Maria Stahl at 12:40 PM 5 comments:

Until yesterday, the Iowa constitution had verbiage in it that stated that "idiots" and "the insane" could not vote. We voted on a constitutional amendment to replace that politically incorrect phraseology with something like "those judged mentally incompetent". Pretty straightforward, huh?
Well, I would have thought so. But 18% of Iowans actually voted against the amendment. This makes me laugh every time I think about it. Why? WHY?
Posted by Maria Stahl at 9:24 PM 4 comments:

So much to be thankful for.

I've got the blues, a little, and the best cure is gratitude. Let's see, shall I make a little list?
Posted by Maria Stahl at 4:39 PM 3 comments: