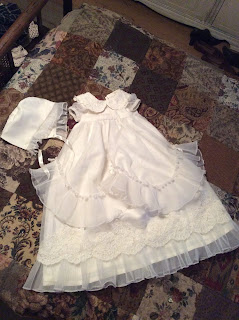 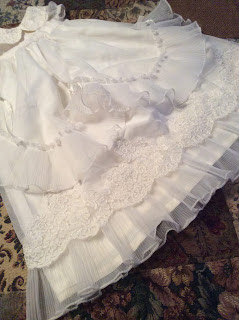 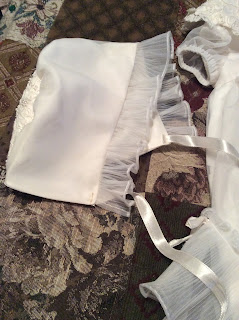 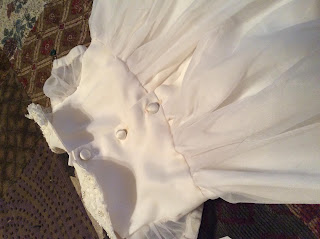 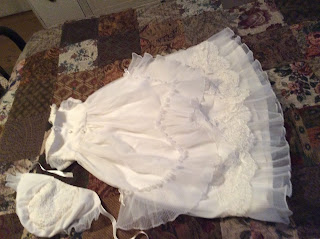 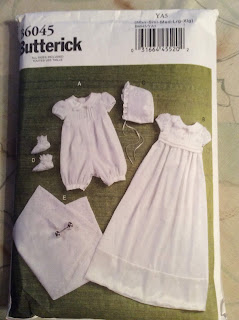 We are expecting a new grandson in June, our youngest's child. A few months ago she asked me how I felt about making a christening gown for him from my own wedding gown, since she had not one of her own. (I had made a gown from her sister’s wedding dress.)

My wedding dress, though I loved it at the time, is very dated to the mid-1980s, for good reason. Lots of fluff and lace and froufrou. Not my daughter’s size or style. As no one will likely ever wear it again as a wedding gown, I was thrilled to be asked to repurpose it. I used Butterick 6045, the same pattern I had used for her sister’s. The thing about using a repurposed wedding gown for a christening dress is, you can reuse so much of the fancy work simply by careful cutting of the skirt to incorporate the existing hem. Some of the bias lines are going to be off a little bit, but it still works. So while this looks like a lot of work on this dress, honestly it wasn’t as much as it appears.

The only things that are not original to the dress are the thread and some interfacing. Everything else came from the dress: fabric, lining, lace, ribbons, beadwork. Oh, and buttons!

If anyone has a wedding gown to reuse and would like to give it a try, I would be happy to consult.

I realized I had this post in draft from last summer and never posted it. No time like the present!

While thrifting at Goodwill, I found two 5-yard pieces of printed cotton yardage from Cameroon, West Africa. Of course I bought them. They had paper labels reading CICAM, which, on researching, I found means they were the product of an initiative to help Cameroonian people to market their skills and traditional produce during the 1970s.

I made two kaftans out of them and wore them a few times before it got too cold for cotton last autumn. Looking forward to being able to wear loose, lightweight, breezy clothes again someday! 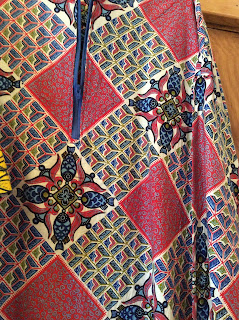 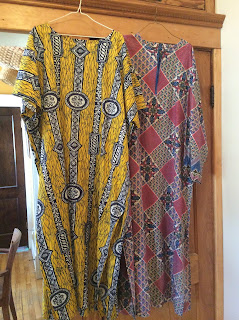 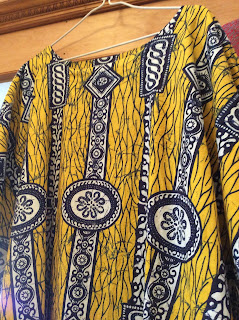 Posted by Maria Stahl at 1:06 PM No comments:

A few months ago I ordered my first set of waxed fabric food wraps from etee.com (etee stands for Everything Touches Everything Else). I had never tried wax wraps before. Once I had the family trained on how to use them (no, you don't throw them away, no, you don't use hot soapy water to wash them, no, you can't leave them in the bottom of the sink in a pool of sludge), we were sold. Except for one thing: Plastic wrap and plastic bags are transparent, and these aren't. Barry complains frequently about all the mysterious blobs wrapped up in canvas in the fridge and gets tired of opening them to see what's in there over and over again.

This morning I took half a day off work for a dental appointment which, due to miscommunication, was only an hour long instead of three (I thought I was getting a crown, but I have to go back another day for that), so I had some time on my hands. I had collected the supplies to try the wraps explained on the blog at Mountain Rose Herbs. I had plenty of beeswax already, and had previously ordered jojoba oil (actually it's a wax, but a liquid wax) and copal resin (from pine trees, basically dried sap). I collected pure cotton quilting fabrics with prints of fruits and veggies and cut them into roughly 12-inch squares with pinking shears. Then I got to work. 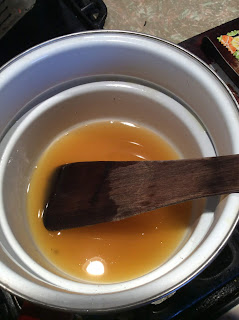 I melted the copal resin in a double boiler (and it took nearly an hour, so allow time for that), then added grated beeswax and jojoba oil in double the proportions directed as I figured since I was going to the effort I might as well do a bunch. The copal resin did not want to incorporate into the waxes, but with patient stirring, eventually it did. When all the waxes were finally melted and blended, I spread my fabric squares on baking sheets (I didn't have any parchment paper), and used a 3-inch foam brush to spread the liquid wax quickly over the fabric. I'd recommend a foam brush for you, also. Very easy and no bristles to come off! 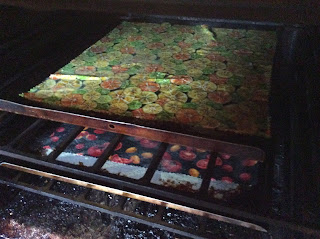 I followed the directions to warm the squares in a medium hot oven and spread the liquid around until the squares were completely saturated, then cooled and washed them.

And here's the result. I probably used too much wax on each one as they are pretty stiff, but having worn out a couple of the etee wraps already, I would rather err on too much than not enough wax, as you lose a little bit every time you use and wash one of these. You can see some excess on the tomato wrap. 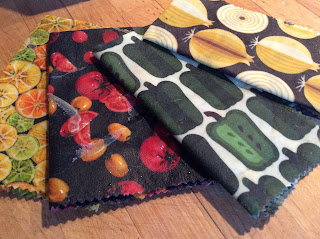 And here's the onion wrap with half an onion in it. 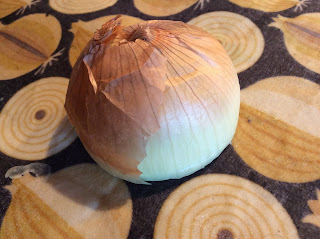 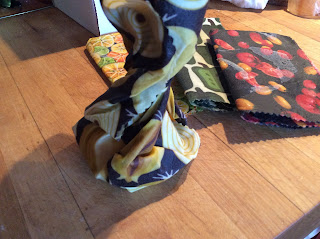 Now we'll know which fabric-wrapped blob in the fridge is part of an onion, which is a leftover half of a sweet pepper, which is a half lemon, and which is a tomato half to slice for a sandwich.

I'll be watching for fabric depicting other fruits and veggies in time to come.
Posted by Maria Stahl at 12:54 PM No comments:

I have had this old floor lamp which needed rewiring for a long time. Finally decided to check that task off my project list. Last week I bought the lamp wire and a new switch, and rewired it using the instructions at Antique Lamp Supply.

With these lamps, the three smaller bulbs are on one switch, and they can be lit with one, two or all three depending on where the switch is. The large center bulb is on its own circuit, and in most cases is a mogul size bulb base, which Antique Lamp Supply refers to as “useful for landing personal aircraft or signaling vessels lost at sea”, which really isn’t too much of an exaggeration.

Once the lamp was rewired and working again, I replaced the three smaller bulbs with visible-element vintage style LED bulbs purchased from Menards. I wanted to replace the mogul bulb with LED also. Mogul base LED bulbs are very industrial looking. I could not find any that were even remotely related to “pretty”. I could have bought or scrounged an opal glass shade for the center light ($40-50 if I could not thrift one), which would have made the looks of the bulb immaterial, or I could have given up on LED and just used an incandescent mogul base bulb (expensive on power, and a heat producer), but then I learned that there is another choice, an adapter to allow a “normal” (or E26, to be more exact) bulb to work in a mogul (E39) socket. And I could find many choices of large visible-element E26 LED bulbs that are attractive and reasonably priced. So that’s what I decided to do. The UPS truck just dropped off the adapter and a large globe bulb, and here is my lamp. 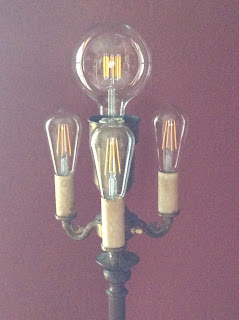 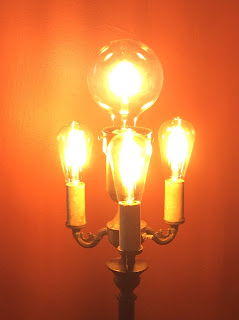 Posted by Maria Stahl at 4:23 PM No comments: