I'm being sarcastic. It's horrible. A few minutes before 10:00 a.m., we are now up to negative 13 degrees Fahrenheit.

On the positive side, both of the cars started this morning (Barry keeps the Jeep plugged in to an engine block heater in the winter, and the Concorde fits in the garage). And when I checked on my chickens, though I feared I would find 4 little bundles of frozen chicken meat, instead I found 4 feathery bundles of heat, nestled down in the straw. They were hungry, and their water had frozen even with the electric heater I keep underneath it, so I gave them fresh warm water and a lot more food and some more straw. And then I closed them up cozy again and left them on their own.

I thank God for our furnace every time I think of it! I complain about it and am always thinking about replacing it, but hey, it's working. Our house is warm and safe. Thank God.
Posted by Maria Stahl at 9:47 AM 5 comments:

Self Portrait with Mirrors 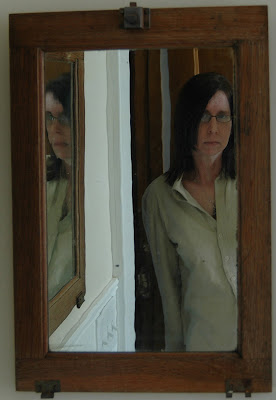 When you lose your Tracfone

Used to be, if you lost your Tracfone, you were out of luck. They couldn't do anything for you.

Barry's was stolen out of the Jeep a couple of days ago while he was parked in the ramp next to where he works. (Thankfully they just took the phone and charger and his hat and gloves and nothing else, and they didn't break a window to get in. So no major damage.) He discovered the theft and called for a police officer, and after filing the report, he called me to tell me about it.

I called Tracfone immediately to ask them to just cancel the phone so at least the thief couldn't do anything with it. To my surprise, the agent asked if I had another Tracfone to which she could transfer the minutes! Thankfully we had a spare, one that I had been meaning to sell on eBay and hadn't yet. I pulled it out of the box, plugged it in, and she activated it over the phone and transferred Barry's number and 800 minutes to it immediately, then flagged the stolen phone so that if anyone tries to activate it, they won't be able to without identifying themselves as Barry or me. Pretty neat.

What I have learned from this is the following:

1. Always keep a spare unactivated Tracfone around. Just a cheapie. Just so you have SOMETHING.
2. Always keep a record of the serial numbers of all your family Tracfones in a safe place.
3. Always keep an eye on how many minutes remain on each of your phones. Just a ballpark figure. If I had not known that Barry had over 800 minutes on his phone, they probably would not have done that for me. I had to tell them what I thought was on the phone, they did not volunteer the information.

One frustration as that in the time between the phone being stolen and Tracfone's shutting it down and transferring the number, the thief used it to send harrassing messages to a young lady acquaintance of his. We found out about this shortly after the number was transferred to our new phone and her frantic return messages started coming to us. Barry called her from our home and tried to explain and asked her to report it to the police, but she said she did not trust them.
Posted by Maria Stahl at 8:07 AM 1 comment:

Got one of these again:

Last time I had one, I held onto it for maybe 5 months, then lost it in the summer eBay doldrums. It's a tougher crowd out there these days, so I'm surprised I won it back. We'll see how long I keep it this time around.
Posted by Maria Stahl at 8:01 AM No comments:

Not the only one

to have a bad day, apparently. Little Miss A came home from school with roses in her cheeks from the cool air and the exercise, but a quivering lip as she told me dire tales of her day, something about a chalkboard falling on her head ("it made a bump!"), her best friends not wanting to play with her and (the worst of all) one of the little boys at school telling her her dog is fat! It didn't help that I laughed at that last one, either. She said it was NOT funny.

Off to eat some worms now

Every time I think I have learned something about parenting I find out the lesson didn't stick.

The lesson to be relearned for today was, "they don't have to like you, they just have to be loved by you." I am usually okay when one of the kids is furious with me, but when it's two at once? Then I have the toughest time being firm.

This morning, so far, I have two of three ready to move out, I think. I was still okay when the first one looked at me with disgust and spat out angry words, but then the second one got angry with something I said (and Barry told me that second one had reason, I wasn't listening as much as I was yakking at this child) and stomped out of the room. In fact, there was a lot of stamping and slamming things around this morning, between the two of them. I apologized to the second one for not listening as much as I should have, and the apology was most certainly not accepted. The first one wasn't speaking to me at all by the time that child left for school.

I barely saw them out the door before falling apart. Part of me is constantly doubting myself: I want them to like me as well as love me and it hurts so much when they don't. I really shouldn't care, not at this stage in our lives. They don't need a friend, they need a mother. On the other hand, I do fall into the same patterns over and over again: With one, I talk way too much, and with another, not nearly enough. In both cases, I think I do not listen enough. (Surprise, surprise. "Not talking" does not equal "good listening.")

The last one,the little one, usually still likes me. I need to appreciate these days while I still have them, because someday she'll be a young lady searching for independence and struggling against the restrictions of growing up as part of a family. For now, though, she still wants to be hugged, still wants my opinion, still craves time with me. Thank God for little ones. And the big ones, too; they're just harder on the heart.
Posted by Maria Stahl at 7:42 AM 1 comment:

What I'm Watching, an Update

First, Terminator: The Sarah Connor Chronicles. It was up (legally) on tv.yahoo.com for a few hours on Saturday, and I caught it, though it had been yanked by the time Barry got home from clinicals with the ambulance company. I think it will be entertaining and interesting, though nothing like the way the movies were. I hope Summer Glau settles into her part a bit; she didn't seem sure how to play it yet. Still, with Bear McCreary providing the score and Zoic doing effects, the show will be worth watching.

Second: Journeyman. I sorta watched it halfheartedly because it was after Chuck and Heroes, but then it started to get to me, and I talked Barry into watching a couple of them and thus was a monster born. Now it was he watched it while I lost track of the series. I am in the process of catching up. I think I still missed something because the last two eps of the set had some gaps for me, so I need to retrace my steps, but it's a very well put-together series. I understand that the writers' strike and of course the cutthroat business of prime time TV in general mean that the series is done, but I hope my understanding is wrong, as it is also a worth-watching show. Time travel is so tough to do believably, and one can find things to complain about in any manifestation of the concept, but over all I think they did it pretty well in Journeyman.

And other than that, until we get our Chuck back, network TV is pretty much for the birds. I don't care about who is dancing with which losing gladiator, as I hate (un)reality TV. We had a great season going, and I don't know if we'll ever get it back when the strike finally ends. I am not against the WGA; they gotta eat, and sharp writing is one of the main reasons we HAVE good television. I'm just disappointed that the timing, while good for the WGA, was so poor for those of us who were thinking tentatively about maybe, possibly, considering renewing our faith in the future of broadcast TV.

So it's back to Netflix for us. We are simultaneously working our way through Wonderfalls, Invader Zim and season 2 of Veronica Mars, and anxiously awaiting the release of Eureka, Season 2 on DVD. *sigh*
Posted by Maria Stahl at 8:04 AM No comments:

And on a related note:

Scott Lydon of the Woot blog had this list of Proposed Nine New Game Shows. (I'd class them as (un)reality TV myself.)

Actually I would watch Vin play D&D. I would. Think he might take his shirt off?
Posted by Maria Stahl at 8:03 AM No comments:

I attended my first caucus last night. It was a fascinating experience! Huge turnout, too -- on both sides of the street. (One party was in the Town House, the other in the Community Center.)

Among other things, I enjoyed seeing a new side of my friends and neighbors.
Posted by Maria Stahl at 9:51 AM 1 comment: 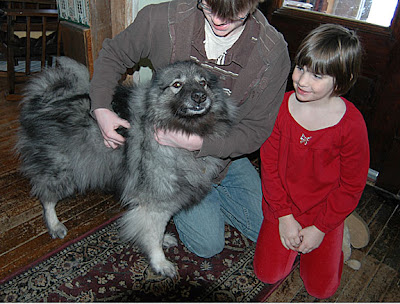 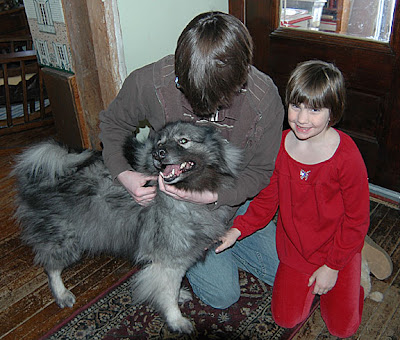 It's unofficially Bo's 7th birthday today. We adopted him 6 years ago today, and were told he was a year old at the time.

He gave me a scare this morning. For a few minutes, his right eye was not conjugate with the left eye; it was deviated downward and a little inward. Barry checked it with a pinlight and it was not correctly reactive; it actually dilated a little to the light. I was panicking, as usual, thinking "stroke." Within maybe 5 minutes, though, he seemed back to normal. Now I'm thinking "TIA."

Anyway I think I'll make an appointment with the vet for a checkup. He's due for one anyway.

In these photos he was very happy because his children had just given him some birthday pancakes.
Posted by Maria Stahl at 11:57 AM No comments: