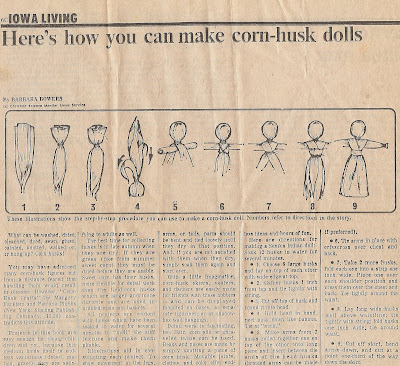 From an old newspaper clipping, no date.
Posted by Maria Stahl at 9:59 PM 3 comments:

Somebody found my blog by searching "iowa zombies".
Posted by Maria Stahl at 2:59 PM 2 comments:

Here is a link to my parade photos. (The slideshows were way too slow loading.)
Posted by Maria Stahl at 4:55 PM No comments:

The first New Albin Days with a 30% chance of snow.

Okay, that's an exaggeration, but this has been a very weird July. We had one blazingly, sickeningly, oppressively hot week in June and since then it's been cool. Most of the time it's been in the high 70s during the day and very pleasant, but sometimes it's been a little too cool. And today it's downright chilly. Just in time for New Albin Days. It's 57 degrees F right now with a high expected of only 65 degrees! In JULY! IN IOWA!

So weird. Where is the global warming I was promised, hmmm?
Posted by Maria Stahl at 8:22 AM No comments:

BARRY: Oh, by the way, I saw a garter snake yesterday. And I didn't kill it.
MARIA: Thank you!!
BARRY: I was too scared. It was a big one. It probably is a mom. And it has babies.
Posted by Maria Stahl at 12:00 PM 1 comment:

Oooooh to be in Escondido...

MY DETAILS! LET ME SHOW YOU THEM:
What: Wil Wheaton reads to you while you drink beer.
Why: Really?
When: Thursday July 23rd, 6pm-8pm.
Where: Stone Brewing World Bistro and Gardens
Address: 1999 Citricado Pkwy. Escondido, CA 92029
Posted by Maria Stahl at 7:57 AM No comments:

And on a lighter note:

Last night I heard my first whippoorwill. It was late at night, Barry and I were lying wide awake in bed thinking about teenaged drivers, deductibles, funerals averted, and such, when we heard this weird call. Barry said, "I haven't heard a whippoorwill since I lived in Pennsylvania." I said, "That's a whippoorwill?" He put on quite a concert for us, calling over and over. Or maybe he thought it was singing. Barry says he has never seen one, only heard them.

My dad called yesterday afternoon to say that they had a wild turkey show up in their yard in suburban Roseville, Minnesota!

And The Grackle Family are dealing with teenager issues. I can so relate. Teenaged Grackles are just as big as their parents, yet they still follow them around, whining in cracking teenager voices to be fed. The dad gets tired of it and pecks them on the head every once in a while, but the mother patiently stuffs food down these giant throats all the time. Poor thing. In our family, Barry is the food-stuffer and I am the one who wants to bite the children's heads off.

* Note: These are just bird pictures I pulled off the web. I didn't take them myself.
Posted by Maria Stahl at 8:24 AM 2 comments:

Protection from the Lord when we don't know to ask

This is one of the amazing things about knowing God: That He protects us all the time, whether we know to ask His help or not.

Yesterday Britta took our car out to Lonning's Landing, a private campground on the Upper Iowa River, where she met with friends to go tubing. On the way home she took the car on a dirt road. Being an inexperienced driver, when she came to a large bump in the middle of the road, she decided the best thing to do was to straddle it. Somehow she says she didn't realize that she scraped the bottom of the car with that bump. What she did was rip the bottom out of the car! It started leaking power steering fluid, and she didn't notice. She drove home, changed clothes and then drove to La Crosse, not bothering to mention what she had done. So we did not know to pray specifically about this. I was nervous for some reason and did pray (as I usually do when she is out with the car) for her safety, but it was nothing unusual or specific, just my general Mommy anxiety.

The door burst open at about 10:30 last night to our daughter yelling, "Dad! There's something wrong with the car! The wheel won't move!" We went outside to find the Concorde stopped in the street right in front of the driveway, with smoke coming out from under the hood. She was right, the wheel would not turn -- because the power steering system was drained completely! There was fluid all over under the car. When Barry looked underneath, the whole front pan thing just underneath the front bumper panel was pushed back about 6 inches. Somehow the radiator still had fluid.

So this is what the Lord did: He kept the power steering working all the way back from Lonning's Landing (10 miles or so), then all the way to La Crosse and back (another 50 miles), all along winding river roads with sharp dropoffs on the sides and water beneath, not allowing the power steering to quit working until she was at the bottom of her own driveway. This is absolutely a miracle. She should have lost her steering on the road somewhere and ended up slammed into a tree, or under water, or scraped against one of the limestone cliffs that they cut to make the river roads. (I am still scared thinking of it.)

We are also thankful to have good car insurance. Once again I recommend Progressive. They are fast and efficient, and they are kind.
Posted by Maria Stahl at 8:04 AM 3 comments:

A message from Lil Miss A

Lil Miss A would like you to know that in a little over an hour she will be at Village Creek Bible Camp! For her first time!! and it will be so much fun!!!

A blog that makes me laugh (at myself)

I just recently discovered White Whine, which is where spoiled white folks post their complaints about the things in their lives that are not going perfectly. These are all incredibly trivial things, and remind me of myself a lot of the time. In fact, that's sort of what MY blog is all about.
Posted by Maria Stahl at 10:12 AM 1 comment: