We managed to get away from everything for a couple of days and go up and visit my parents in Roseville, Minnesota. Barry and Kieffer spent parts of 2 days clearing the heavy snow from my parents' roof, which my father was very concerned about; there was already some warning leakage going on, and everybody but everybody has horrible ice dams right now, him included. The house gave a sigh of relief when all that heavy snow was down. The ice dams are still there but we have some warm weather (in fact it's actually raining right now) so maybe they will soften up.

More fun stuff was that Barry and my dad pulled the carpet up from their hallway. They have oak floors throughout the first floor, except for the kitchen and bathroom, but have kept them covered with carpeting for most of the time since the house was built in 1958. It was so much fun to see what was under that carpeting. Gorgeous, narrow boards, no warping, no staining, just so pretty. I am, of course, itching to rip up the rest of it, but they are not ready for that, and may never be. Hardwood has a lot of strong points but it has its downsides, too. Anyway, it was fun to see that pretty wood.

And both evenings we were there, my father built a fire in their Franklin stove in the basement and we all gathered there and watched movies, first The Blind Side

, which we had all seen but it had been awhile, and then The Mystery of the Sands, with an extremely young, pre-Logan's Run Michael York and Jenny Agutter. Kind of a cool story. I don't think the movie has ever been released on DVD; my father had found a decent VHS copy, though.

Now we're home, and everybody has scattered to where they need to be, and I need to get to work, too.
Posted by Maria Stahl at 3:16 PM No comments: 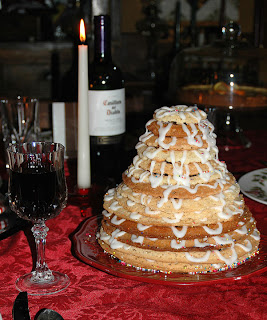 You think you can let down your guard at the holidays? Think again.

Zombie defense awareness does NOT take time off, even, or especially, not at the holidays.
Posted by Maria Stahl at 2:43 PM 2 comments:

Living in an old house...

... drafts are pretty much a given.

Barry has been ripping down the old lath and plaster walls, room by room, and replacing them with insulated drywall, but we have not gotten to the two front rooms, and now they need to wait till he finishes his degree. And they are COLD. Last year we just closed the doors and shut the heat ducts to them and pretended they did not exist for all of January. This year we started early. (Did you know it's still officially autumn? and already below 0 Fahrenheit at night?) The big pocket doors and the standard-sized side door have been shut. Unfortunately the pocket doors don't like to stay closed, and sneak their way back into the walls, and there's a good 2-inch gap under all 3 of the doors. So I finally did what I should have done a long time ago and made these snakey thingies out of scraps of upholstery fabric to stuff under the doorways. 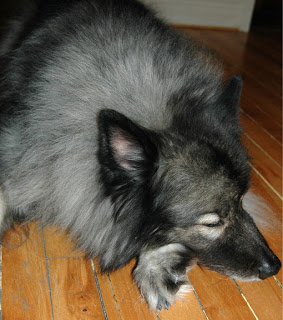 Barry wanted to stuff them with keeshond fur.
He cited the excellent insulating qualities and easy availability of this particular commodity. It keeps Bo quite cozy, and I hear you can actually spin it into yarn and make sweaters out of it, so we know it's warm. And since Bo's "shedding season" seems to last 11.75 months of the year, the fur is pretty much all over the house, in clumps that blow around every time the furnace blower starts up. It's self renewing! So green.
Instead I insisted on crumpled-up plastic garbage sacks, of which I have hundreds. See, I can be green, too.
I can already tell a difference. The bumper under the pocket doors wedges them together so they can't work their way apart, and all of a sudden there's much less of a cold draft on my feet.
Success.
Posted by Maria Stahl at 5:36 PM 3 comments:

Michael from the Cul-de-sac Shack is celebrating reaching 100 followers with a giveaway of some neat kitchen glassware. Check it out here.
Posted by Maria Stahl at 7:54 AM 1 comment: 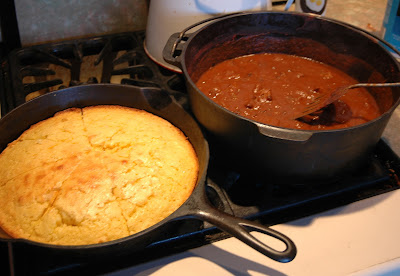 It's kinda cold, and kinda windy. And we have some snow. *

Listening to one of my favorite Christmas albums

I needed some Christmas cheer while urging my surly family out the door this morning to their respective schools, so I put on one of my very favorite Christmas CDs. And I rediscovered the beautiful "There Are Angels Hovering 'Round." Such a lovely, simple song. I found several versions of the lyrics on line, but here they are as on this CD:

Quote from another track:


Norwegian bachelor farmers. They don't reproduce. Why are there still so many of them?

By the way, when I went to add that Amazon link, I was amazed to find out how expensive the CD is now. Buy the MP3 if you want a copy for yourself, it's much more affordable. Oh, and you can preview the tracks, so listen to this pretty song for yourself. :)
Posted by Maria Stahl at 7:33 AM No comments:

The link is up for applications for summer work at VCBC. It's not too early to be lining up work for next summer.
Posted by Maria Stahl at 12:03 PM No comments:

Now THAT is customer service.


We bought this textbook last summer for my husband's nursing classes. I
ordered it by the ISBN. We received the book and I never checked it
against the ISBN, just handed it off to my husband. He got through
nearly the whole semester before realizing that it was the wrong
edition, as it is missing a bunch of very important appendices in the
back that the new edition has. We just assumed that the ISBN had been
wrong in the Amazon database. But I was just looking up the newer
edition (because we still need to buy it for the 2nd semester) and
there's a big flag at the top of the page saying that we purchased this
book last summer. So we DID order the correct ISBN, the order was filled
incorrectly.

It is far too late to return the book, that window closed in October. I
am just letting you know that this happened. I realize it was most
likely an honest mistake, as we have ordered from you many times and
have always been entirely satisfied. If I had been the seller, and I had
done this, I would want someone to tell me.

We sincerely apologize for the error.  We have searched our shelves for
a replacement copy of your book, and unfortunately were unable to find
it. We have therefore initiated a complete refund to you for this order.
Please, keep the book we sent, at our expense.

Again, we're truly sorry for any inconvenience this matter may have
caused you, and we hope you'll give us a second chance to earn your
business.

That's Owlsbooks on Amazon. I'm a satisfied customer.
Posted by Maria Stahl at 11:12 AM 1 comment:

Used to be, on Facebook, you could click a button and become a "fan" of something. I liked that. I could say I was a fan of my home town, or of a restaurant. I could show how much I loved Firefly by becoming a fan of it. Then they changed everything to "like." Now you can "like" stuff. You either like it or you don't, there are no gradations of "like." You can't "love" something, you can't even "dislike" it. You just like it. It was like the beiging of the Internet, as in, I like things in a beige, mediocre sort of way. I grumbled, but I didn't protest vehemently.
Then they made it so you could "like" photos, wall posts AND comments on photos and wall posts. All of a sudden, everything had a "like" button on it. And I found myself falling into line. I would "like" funny comments, I would "like" insightful comments, but I wouldn't say anything. It was just sort of a generic mark of approval. It was, and is, very lazy. And beige.
What's worse, now I find myself looking for "like" buttons all over the Internet. I find myself not wanting to actually come up with my own words to comment on something, I just want to hit that little button and show my approval or solidarity. It's commenting for the lazy person. It's like, I don't care enough about what you just said to actually say anything, I just want to sort of nod vaguely in your general direction.
I feel like I am losing brain cells by the thousands.
Posted by Maria Stahl at 10:31 AM 3 comments:

Another of The Ten Worst Sci-Fi Films of All Time (Kunochan.com)

Writer Erik Even is back with the latest installment in his series on the Ten Worst Sci-Fi Films of All Time. Here's a teaser:


Here’s a science fiction story for you: some time after the release of Indiana Jones and the Last Crusade in 1989, George Lucas was replaced by an untalented clone duplicate.

How else to explain the crap that has come out of Lucasfilm in the intervening years? Christ, this is the man who wrote and directed Star Wars, likely the best science fiction film ever made. Of course that was well before Star Wars became Star Wars: Episode IV: A New Hope: Special Edition: Guinness Book of World Records’ Film Title with the Most Colons in It Edition.

Read it all here.
Posted by Maria Stahl at 7:59 AM No comments:

This is the father of one of my college classmates. His stories of life as a Czech under the German occupation were recorded for posterity. Start with this one, then watch them all.
Posted by Maria Stahl at 3:13 PM 1 comment: