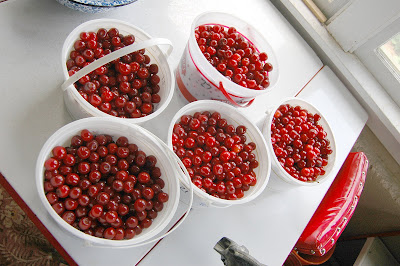 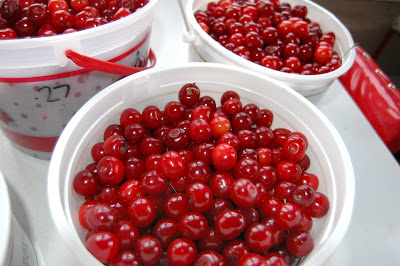 I love pie cherries! There's nothing like them. I find them delicious just as they are, and of course in pie, and crisp, or jam. Pretty much there is no way that I don't like pie cherries. The last time I picked them myself was the year before Lil Miss A was born, out in Door County with my sister-in-law Vania. I had no idea that there were sour cherries to be had less than an hour's drive from right here in New Albin, until our friend Sara tipped us off that she had found them in Gay's Mills and Richland Center, Wisconsin.

So last weekend, Lil Miss A and I grabbed our empty ice cream buckets and headed out bright and early to Kickapoo Orchard just outside of Gay's Mills. We were almost too late; nearly all the cherries had been picked. But we still easily picked about 25 pounds in less than 2 hours. Plus all the cherries I ate on the spot. Which was a lot. It was just a lovely day, very breezy with clouds scudding by and looking like they wanted to be a storm but hadn't quite made up their minds yet to get organized. It's also a lovely orchard, built on rather dramatic hillsides with astounding views. Nobody else was picking that day, just me and my little girl, so there we were all by ourselves, enjoying the day. Lil Miss A tasted one sour cherry and that was it for her; she said she'd wait for the cherry crisp at home. She was quite a good little worker! I picked the high ones and she picked the low ones.

I spent most of the rest of the day washing, pitting and freezing cherries, making one big cherry crisp, and then of course wiping up sticky cherry juice from every surface. I want to do this again next year!

I also bought a quart of cherry juice concentrate at the orchard. This is sour cherry concentrate, now, not Bing, so it's very, very tart. I think it's just delicious, but nobody else in the family agrees, so I can drink it to my heart's content. Tart cherry juice is supposed to be full of good stuff like antioxidants and some people swear by it for chronic arthritis pain. I just think it's tasty.
Posted by Maria Stahl at 7:34 AM

I am so jealous - I missed it again out here. I will have to send you my Sour Cream, Almond Cherry Muffin recipe if I haven't given it to you yet - yummmmm!

Those were the days - picking cherries in Door County!!